For financial services organizations, trade settlement failures are administrative headaches and incur substantial costs, even including fines or other penalties. Here’s how to start applying predictive analytics to help roll back these burdens.

Trade settlement failures are already a prevalent issue in the post-trade industry, and new European rules will soon come into effect that impose tougher standards on trades that fail to settle on time. Such failures occur when a seller doesn’t deliver securities or when a buyer fails to pay owed funds by the settlement date. According to the European Securities and Markets Authority, failed trades account for about 3% of the trades value in corporate bonds and sovereign debt markets, and about 6% in equity markets.

This translates into millions of trades failing annually. According to the Depository Trust & Clearing Corporation (DTCC), a trade settlement failure rate of just 2% may result in costs and losses of around $3 billion. The European Central Bank (ECB) cites the value of delivery instructions processed annually by European CSDs (central securities depositories) and international CSDs as €1,295 trillion in 2018, and the number of deliveries approached 390 million. Such large volumes and transaction values weigh heavily, as even a 1% average failure rate equates to about four million transactions failing annually in Europe.

The Central Securities Depositories Regulation (CSDR) introduces punitive measures under the settlement discipline regime for failing to deliver securities and initiating buy-in of aging fails. This has strengthened the business case for urgent action to ward off the financial threat. In addition to investing in regulatory technology for CSDR compliance, firms should explore opportunities to reduce costs associated with trade settlement failures, especially in the post-COVID-19 era where cost optimization would be a critical business imperative. Predicting trade settlement failures will not only lessen risks arising out of these transactions but also reduce the financial impact of cash penalties.

Typically, a trade settlement failure results in trades or a group of related/linked trades falling off the straight-through processing (STP) engine of market participants. A failed trade then goes through a manual investigation in an exception queue, and mid/back office personnel take corrective action through interventions. Corrective actions include addressing referential data, trade booking and inventory management issues that caused the process to abort. Such failed trades are responsible for about 80% of the total operational costs involved in trade processing. The administration and resolution of settlement failures can adversely affect trade processing across market entities and, if left unaddressed, may potentially disrupt market operations.

According to the DTCC, firms engaged in post-trade activities and settlement processes in general, are slow to adopt digital solutions. However, there are glimmers of progress. One of Europe’s largest CSDs is investing in digital and data services that support post-trade efficiency. And a large European bank is exploring ways to reduce issues in trade processing with a predictive analytics tool for decision support.

A digital solution using predictive analytics will assist in facilitating early corrective action when fails occur, such as alerting investment managers prior to the settlement date about insufficient securities. We recommend the approach to an analytics solution for predicting trade settlement failures depicted by the illustrated equation, where the probability of a trade settlement failure (the dependent variable) is determined as a function of the factors (sets of independent variables) presented below.

The formula is asset-class agnostic and can be applied to cash markets. The model’s output is the probability of a trade failure of a security (ISIN) for a settlement date. Based on the probability, business operation leaders can identify a group of trades that can potentially fail and involve counterparties to take action, such as addressing a liquidity shortfall. This early alert to counterparties will smoothen trade settlement processing on the settlement date. 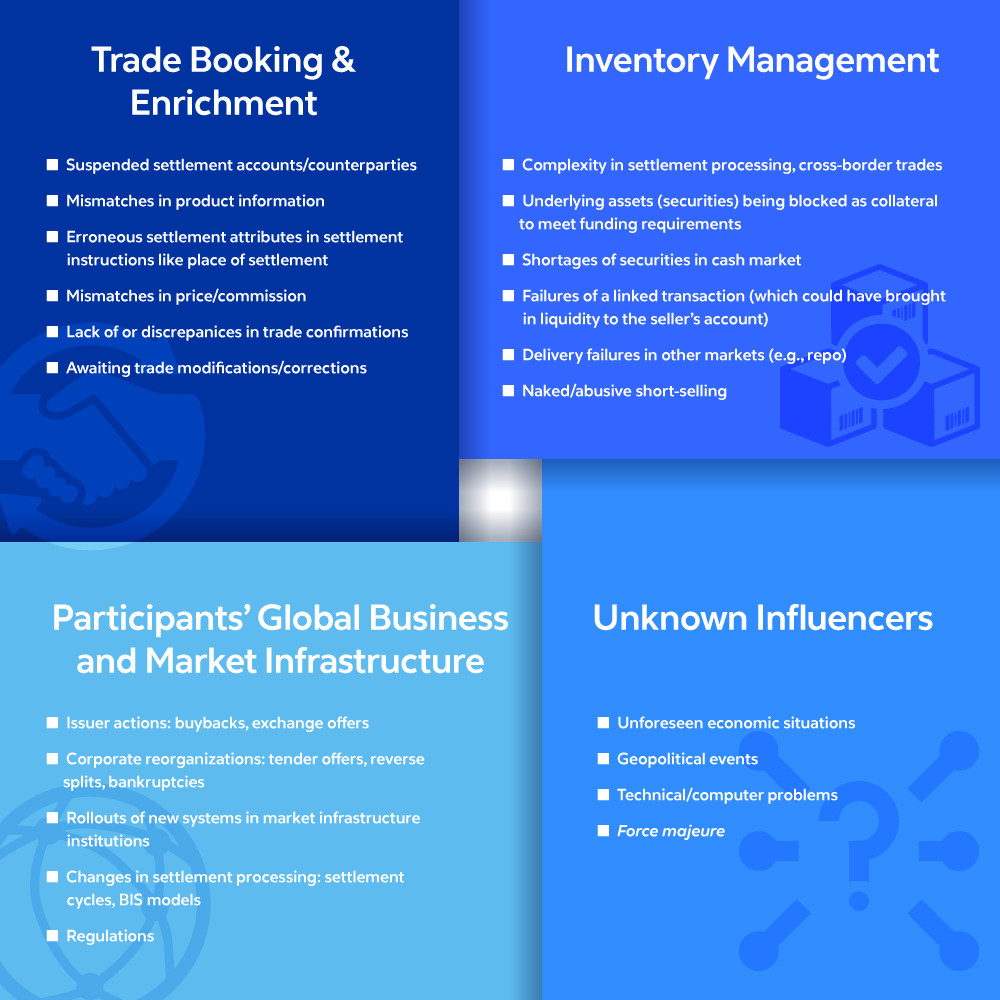 Initially, predicting the probability of failure will be based on historic settlement failure trends, which when fed into a machine learning algorithm will predict the baseline probability of a failure. A feedback loop, such as pattern analysis, will feed data, such as settlement fails and their associated reasons, to refine the algorithm. With iterations, the predictions will better reflect reality.

A detailed analysis of failure reasons can provide insights on the corrective or remedial action to be taken in processes, people, technology or a combination thereof, thereby improving prediction probability.

The algorithm, for example, may predict that a set of trades of a security are expected to fail on a given settlement date, due to the following reasons (or a combination thereof):

Teams can initiate remedial action by alerting the delivering counterparty upfront (prior to settlement date) about the potential of a trade failure along with the corresponding reasons.

These predictions and subsequent proactive measures will help clients in many ways such as reducing the cycle time to resolve trade settlement failures, decreasing time spent firefighting among market participants on trade failures, easing administrative burdens and enabling better deployment of human resources. We project that businesses can reduce the overall number of failed trades by about 40% and ensure teams spend less time on unproblematic trades and instead focus on monitoring those more likely to fail. The accurate prediction of settlement fails will greatly help mitigate or reduce penalties arising out of such failures or violations of regulatory norms.

Global capital markets are inherently complex, with varied practices, laws, systems and local regulations. With greater collaboration among regulators and market associations, there is a push toward more standardization and transparency in the capital market value chain. These actions lay a strong foundation for achieving greater economies of scale among participants. As the benefits of applying AI and machine learning become clearer, we anticipate that financial institutions will more aggressively adopt these solutions to mitigate risks and improve operational efficiency.

Learn more by visiting the capital markets section of our website, or contact us for more information.

This article was written by Vinod Malpani and Balaji Murali of Cognizant’s Banking and Financial Services practice.