Mainframes in a digital world: Deciding whether to move on (part 1)

The digital-first imperative, combined with cost and skills factors, have many businesses re-evaluating their commitment to the mainframe. Read on as we explore factors to consider when deciding whether to modernize legacy applications — or move on.

The venerable mainframe is so deeply embedded in many businesses that it’s hard to imagine eliminating it. Countless person-hours and custom code have been invested — for over half a century, in some cases.

Nevertheless, myriad factors, including the shift to a digital-first attitude in business, are prompting many businesses to reconsider their technologies and processes, including how to address aging legacy platforms and applications. We are frequently asked by clients about various options for the workhorse mainframe and how they might modernize its inner workings. Businesses wonder if they should update the platform itself; adapt new approaches for the data and applications that run on it; or move on altogether.

This three-part series applies our experience and shares client examples to answer these questions. We begin by explaining the factors that enterprises should use in deciding whether the mainframe still suits their needs. Part 2 will inform companies about retaining and optimizing their mainframes by exploring how to make this happen. Finally, part 3 looks at the future of the mainframe in an increasingly digital business world.

Sometimes, it seems “the mainframe is dead” predictions go back almost as far as the platform itself. But these predictions are as wrongheaded as they are cliched. According to a 2019 report from Allied Market Research, the global mainframe market was just under $2.1 billion in 2017 and is projected to hit nearly $3 billion in 2025. That’s a projected compound annual growth rate of 4.3% from 2018 to 2025 — a mature market, to be sure, but not deceased by any means.

And that’s just part of the picture. While the quantity of mainframe use is important — especially in this age of big data, which isn’t going away in the foreseeable future — the nature of mainframe reliance is vital as well. The platform has long been relied on to manage the operational data that forms the lifeblood of business in secure, reliable, economical fashion. As noted, heavy-usage organizations have spent decades and millions customizing their environment and apps to serve company-specific purposes.

Despite the many strengths of mainframe computing, the platform is under scrutiny for several reasons, most of which align with one of two budget categories: cost and digitization.

With these factors in mind, enterprises are taking a hard look at their mainframe services’ limitations and weaknesses. Mainframe concerns vary depending on the size of the organization (see below). Smaller enterprises — which, for the purposes of this discussion, we define as those using fewer than 120 million service units (MSU), which equates approximately to 1,000 MIPS — are paying very high prices for that computing power. This leads to a powerful fiscal argument against the platform, so it’s little wonder that these businesses’ most common question is how to exit the mainframe.

Note, however, that even for smaller users of mainframes, the decision is seldom a simple dollars-and-cents issue; organizations of all sizes should go through an assessment (see part 2 of this series) of mainframe benefits, pain points, potential reasons to exit or stay in the platform, and whether to modernize it to create a “digital mainframe” platform, which is characterized by one or more of the following:

The figure below illustrates generally accepted industry figures on how many MIPS are considered small, medium or large mainframe usage. 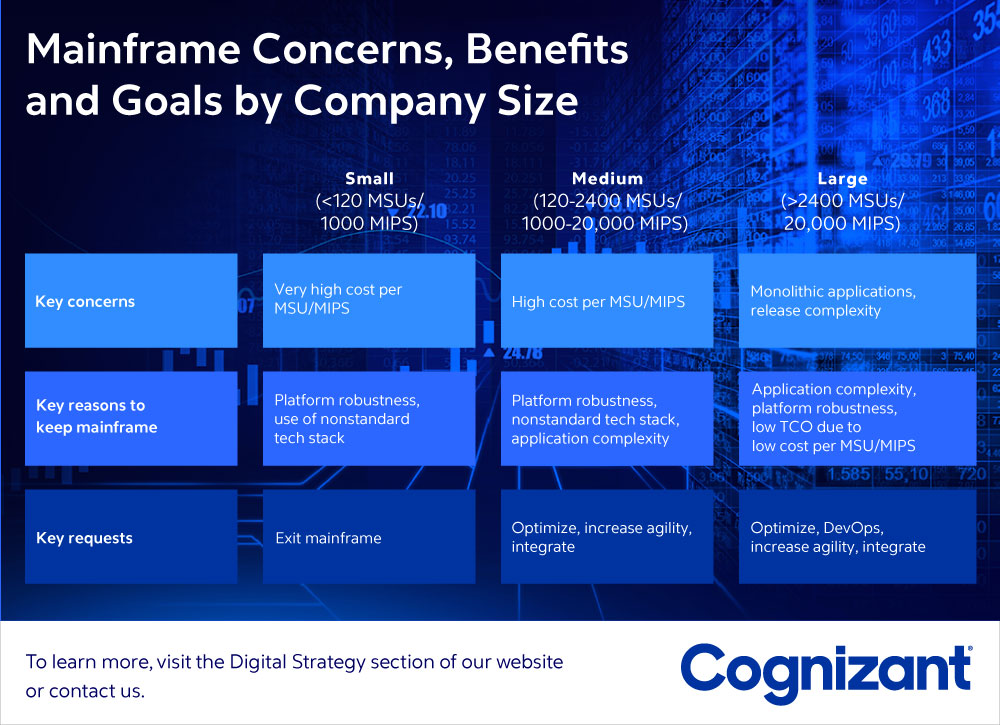 By contrast, for large organizations (those using more than 2,400 MSUs/20,000 MIPS), the mainframe’s power comes at a far lower cost per MIPS. When combined with the platform’s other strengths, this weakens the financial case against the mainframe — and indeed in most of these organizations’ cases, sheer data-crunching needs demand the mainframe platform. These are the businesses that are more interested in optimizing and increasing the agility of the platform for a digital-first environment. Part 2 of this series explores the primary ways to achieve these goals: in-platform modernization and re-platforming.

Naturally, this leaves medium-sized mainframe users, those running 120 to 2,400 MSUs/1,000 to 20,000 MIPS, with a conundrum. Depending on where they fall in this usage range, they may be paying a lot or a little for their computing power respectively, and their concerns will vary accordingly. In our experience, enterprises in this category typically want to retain and optimize their mainframe. Like larger organizations, they should evaluate the primary modernization options (in-platform and re-platforming). In many cases, these midsized users re-platform selected applications, thus reducing their mainframe reliance — until their use of the platform pushes them into the “small user” category, at which point the argument to exit the mainframe altogether grows compelling due to high cost per MIPS.

Exiting the mainframe to reduce cost

In an illustrative case, a leading Canada-based financial services group client with operations in Asia, Canada and the US was running IBM’s z/Virtual Storage Extended (VSE) operating system in its Hong Kong operations. With cost savings, hard-to-find mainframe skills, and business goals in mind, the goal was to shift to a cloud-based open platform. Over 16 months, we helped the client do just this.

Along the way, we reengineered two complex business applications as web-based systems with enhanced user interfaces and scalable, extensible architectures. The results were notable:

Should you make the move?

We’ve focused on cost per MSU/MIPS because in our experience, this is the primary factor in determining whether to exit or retain the mainframe platform. As noted, however, other factors are in play. Often, legacy systems are not “digital-ready.” They are expensive to maintain and difficult to change — even more so as the skillsets required to work on legacy code fade away, leading to IT recruitment and training challenges. And understandably, business leaders are increasingly drawn to pay-as-you-go models to replace heavy capital expenditures. Whatever their mainframe footprint, organizations must weigh these factors before arriving at such a crucial decision.

Part 2 of this series highlights businesses that have made the decision to update their mainframe for the digital-first world of today and tomorrow.